Freedom Planet has been Greenlit

Just a few hours ago, Freedom Planet became one of the hundreds of games which now has been given greenlit. This means that the game will be available in the Steam service. Price, of course, is still unknown, but it is a very valuable achievement for the developers. You can find the whole list here .

Gamescom has just started, and some pretty neat gaming news is rolling up already! And there would be no gamescom without Sonic related news of course! Sonic Lost World has received yet another trailer. This one is mainly focussed on the multiplayer and co-op sections. The Co-op section will let a friend play alongside you to complete a level. While player one is Sonic, the second player is a mech created by Tails. These come in all sorts of variations, from UFO's to Copters. The Multiplayer section is very similar to the Sonic Colours Simulation Area. You race as ''drone'' Sonics against each other and compete for the best place. MiiVerse Item Sharing lets you share items with other players. From power sneakers to wisps. How this is going to work is unknown yet.

Some other details about the trailer: The Frozen Factory Zone has been shown again but this time outside. Now we finally see why the zone is called ''Frozen'' because we got another snow themed stage! And we also see Sonic skating like Shadow does, totally way past cool! There has also been a new wisp revealed, but all details are currently unknown. All we know is that Sonic transforms into a rolling bomb which explodes at the end. More information on that later!

EDIT: At the end of the trailer, you can see something.. special. See for yourself!

Today, Sonic Dash was once again updated. In this update:

Also, a Blaze the Cat model was discovered in the game files. Are the players ready for a new global challenge?

Yes, that's correct! We've been bombing you with news all the time, and now that Sonic Boom has arrived, even more information has been spoiled to the public! This trailer of Sonic Lost World contains more looks at the stages plus *gaps* A NEW STAGE!!! The stage being shown is the infamous water level. What new abilities will Sonic gain in the water? Can he swim again, just like he did in Sonic Colors ? i Guess we'll just have to wait. More parts of the Frozen Factory Zone have been shown too, showing that this stage is based not only on the usual casino theme.

For more information about the new Wisp that has been revealed , click the full version.

The cutscene for Sonic Lost World that has been mentioned earlier, is now finally dubbed to English! This cutscene has been shown at the Sonic fan festival Sonic Boom.

Now we finally know the reason why the Deadly Six attacked Eggman and one of their abilities. We also know what Sonic and Tails their influence was within this cutscene.

Nintendo Direct NA showed us a lot of neat stuff today. And with that I mean a lot. And how could Sonic not be in there? Today, even MORE gameplay of Sonic Lost World has been revealed with a very entertaining bonus: The first ever Sonic Lost World Cutscene! (Click more to watch the entire cutscene)

This time, the 3DS version of the game gets a spot in the sunlight too, as it's been shown several times with the new revealed stages.

Therefore, a nice little update being shown is the communication between the 3DS and Wii U version. Yes, you heard that correct, Co-op is possible!!

As it turned out, yesterday's patch for Sonic & All-Stars Racing Transformed, about which we wrote earlier, not only added a new character, but also changed an already existing one - General Winter.

Some users on the official SEGA forums have expressed their dissatisfaction with the fact that his tank uses symbolism of the USSR and, in the end, SEGA decided to replace it. The vehicle seems to have gone through a change of regime - now instead of a hammer and sickle, players see black and red stars.

It is not known whether this is due to the unfolding scandal surrounding Company of Heroes 2, which General Frost is from, or not, but the changes were made, apparently, in order to avoid further dissatisfaction.

Update: It has been stated that this was done in order to address the political and cultural context in the game.

At the Summer of Sonic 2013, a new trailer has arrived! This time, the gameplay is better shown and the stages get a spot in the sunlight too!

Sonic Lost World will be released at 18 October in Europe, 22 October in North America and 24 October in Japan

A new addition to Sonic and All-Stars Racing Transformed 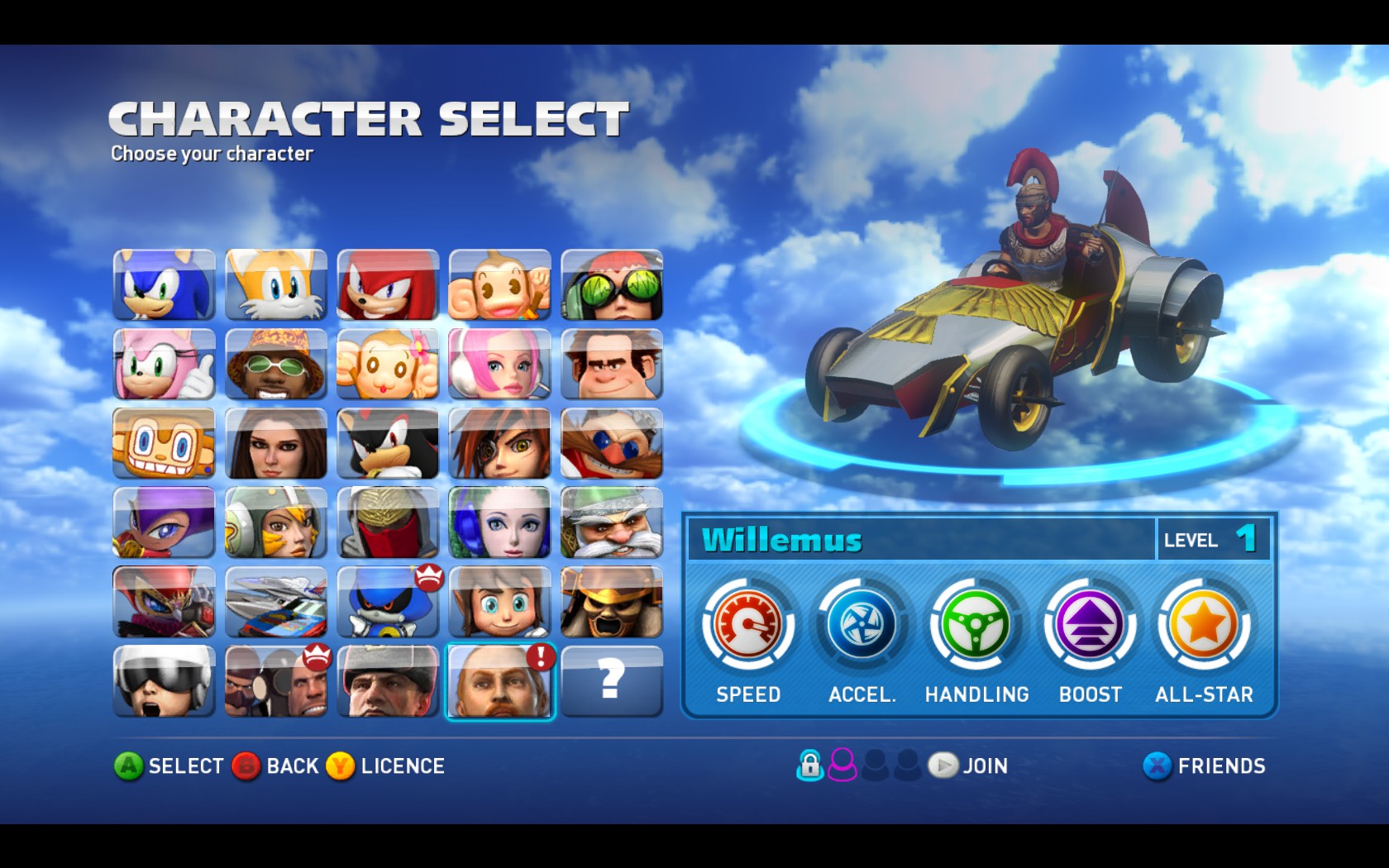 Just a few minutes ago an update for the PC version of Sonic & All-Stars Racing Transformed became available. The update adds a character from the game Total War: Rome II, Willemus.

The patch with the character weighs in at about 250 MB.

This is the second update of the PC version of the game; the first one, adding General Winter, came less than a month ago.

Good news Folks! Shadow the Hedgehog is now avaiable in Sonic Dash! The first global challenge asked us, the players, to race 100 laps around the world. The deadline was the 5th of August, and the qualifications have been met suprisingly good. With all players racing around, the Ultimate Lifeform has finally been released upon the dashing world! Good job guys! For everyone who participated in the challenge, Shadow will automaticly be avaiable. For people who didn't, he will be avaiable at the in-game shop.